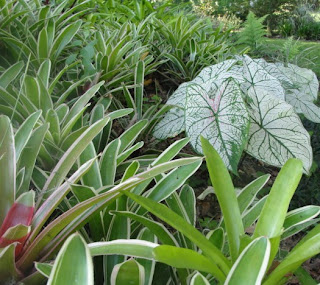 Years ago I read a story about a white garden ~ ~ sometimes referred to as a moon garden or twilight garden ~ ~ and ever since then I've dreamed about having one.

The simplicity of the green and white plants really caught my interest which was unexpected because I'm a big fan of color. I was amazed at how beautiful and soothing a garden of green and white could be.

A new house in 2007 provided me with a clean slate of property in which to plant my white garden. So, come along and I'll give you a peak at how my white garden is growing.


Humble Beginnings
Here's a photo of its humble beginnings in early spring 2008. The layout was established and a couple of philodendrons were planted as a screen from the neighbor's home, and as a dark green tropical background for the garden. There's a vein of white clay that runs beneath this bed with only an 8 inch topping of poor top soil. In summer this area is very wet and in winter...very dry. 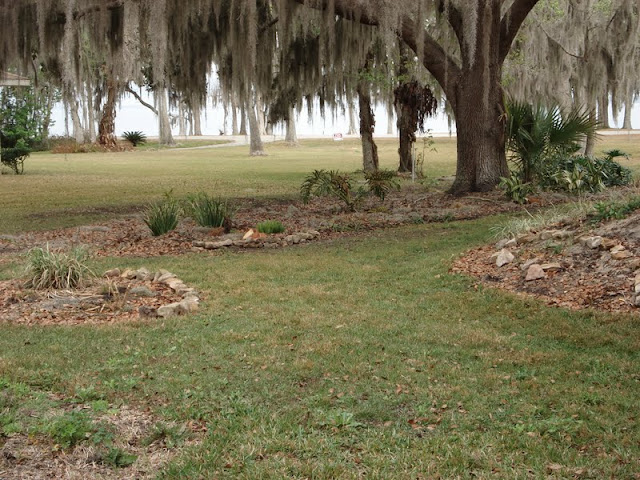 One year later in 2009 ~ ~ the philodendrons were growing nicely and a few more basic plants: iris, foxtail asparagus fern, variegated cast iron, Aztec grass, yarrow and bromeliads were added, along with a couple of garden accents. The process was slow going. 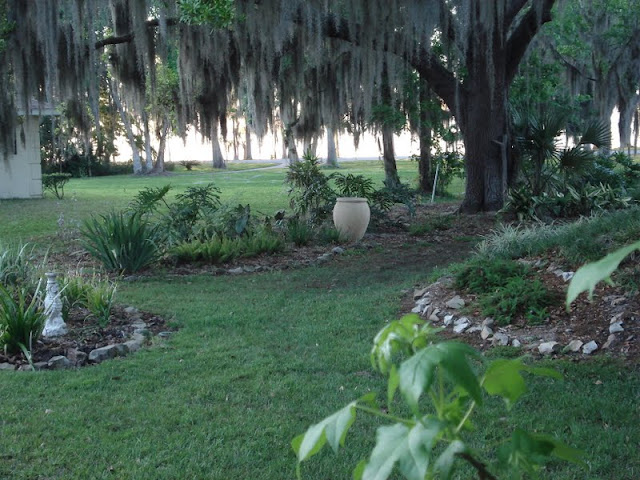 But by the summer of 2011...the garden is maturing quite nicely. Hints of other colors can be found at different times of the year such as the pink in Miss Muffet caladiums in summer. And, spring brings a complement of blue color from flag iris, Regina iris, and African iris, but predominantly the garden is varying shades of white and green. 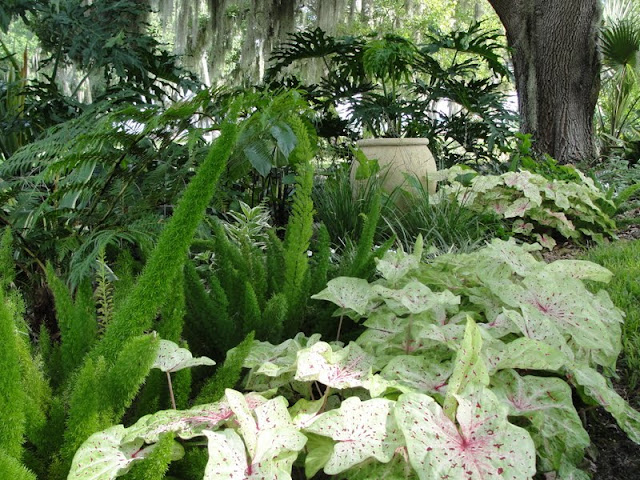 The yellow-green foxtail asparagus fern has become a favorite of mine. It really stands out against darker green plants. Variegated Aztec grass was added in clumps here and there, as well as St. Bernard's lily and a variegated hydrangea. 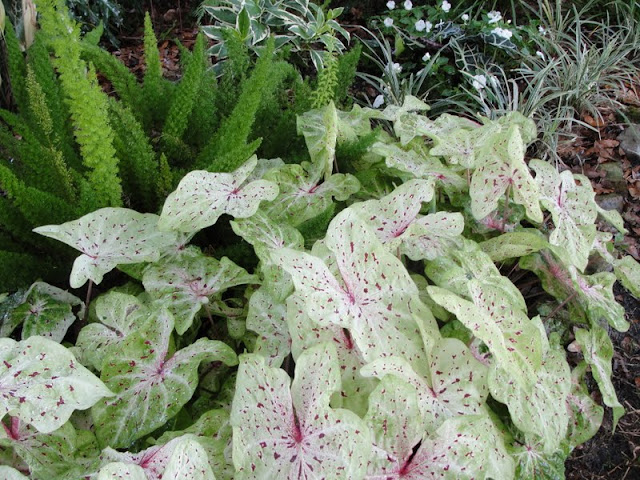 The pink in the hydrangea that blooms in early summer beautifully fades away to a celery greenish and linen  color with hints of pink. Holly fern add beautiful texture while white impatiens and African mask alocasia fill in the gaps. Love that shiny, waxy leaf of the alocasia. 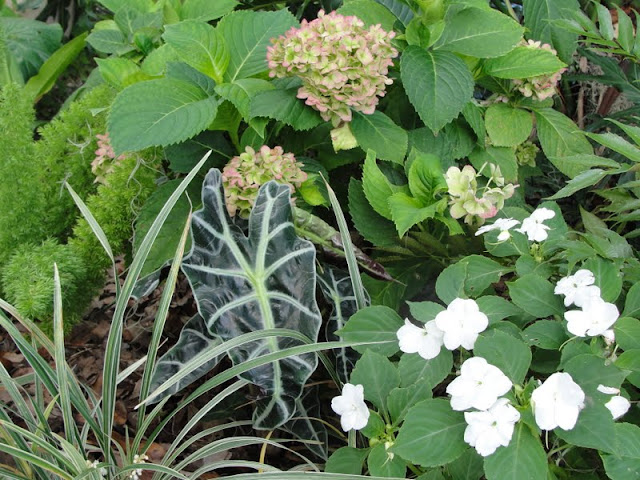 Dark...almost black foliage is included with the addition of the black stemmed elephant ears and the African mask alocasia. I love the way the white just pops out against the dark foliage. 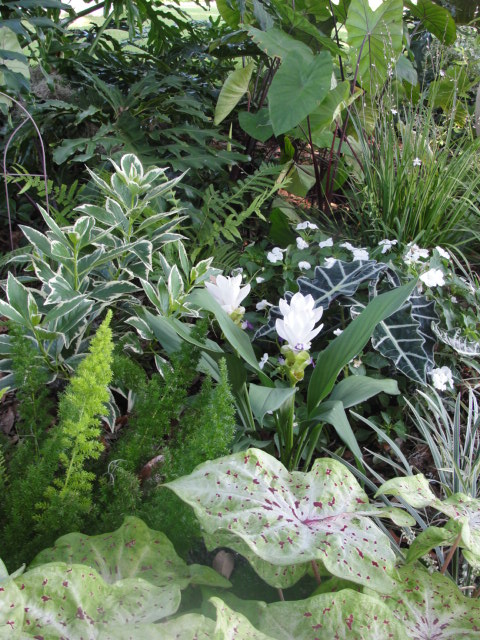 Most of the garden is in shade but the outer fringes where the Acoma crepe myrtle, white guara and variegated ornamental grass are receive a good portion of sunlight each day. 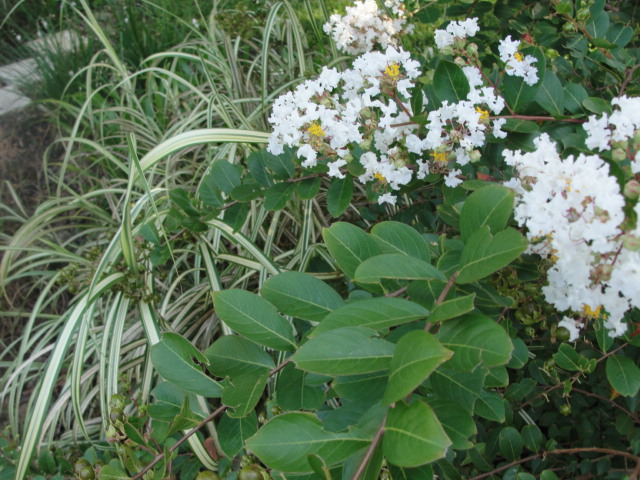 Two variegated Chinese privets encircle the back corner of a patio area I'm working on. They really glow at twilight. 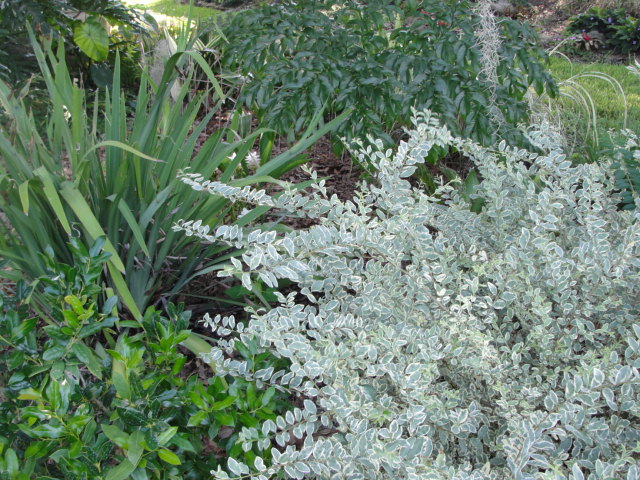 Siam lilies add a punch of white in the summer, and the variegated bark of the amorphophallus adds a soft bit of whiteness to the garden, while its umbrella-like canopy of foliage adds a tropical feel. 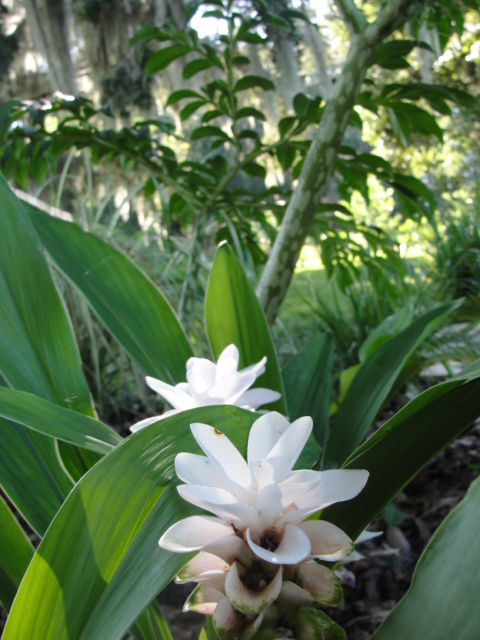 Variegated cast iron plants are such easy shade-loving plants and they seem to like their spot beneath the Australian tree fern. 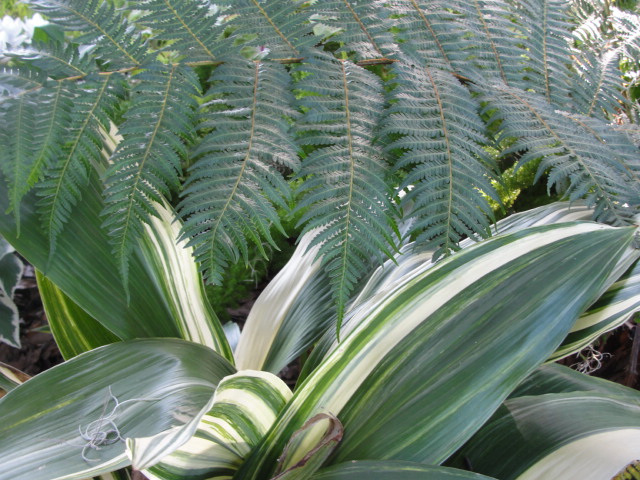 A peak from behind the var. ornamental grass reveals an overall look at the white garden. I think the gray Spanish moss hanging from the live oak goes nicely with the white and green.  Recently a patio of white pavers (my mother gave me these from her garden so I needed to find something to do with them - - aha, the white garden, of course) were set down and dwarf mondo grass was planted between each one. Eventually a white concrete bench will be placed at the back of the patio for a spot to sit and rest. 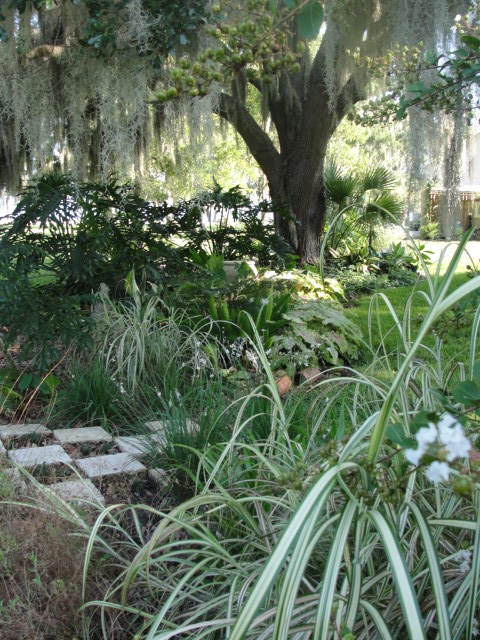 The white garden continues to evolve with plans to add some lime zinger and black beauty alocasias, flax lily, more varieties of white caladiums and white angelonia next spring. It is one of my favorite spots in my yard...it's so peaceful and relaxing to spend time there.
Posted by Susan at 7:27 AM

Looks great, I love white flowers in a garden, especially mixed with blue and purple. Thanks for showing us.

Love your white garden Susan. It has really filled in nicely in just a few years. It is very soothing.

Beautiful, I like the combination of fox tail and the caladium

Hey Gina...They are definitely very soothing. Looks like the hurricane might be heading your way as of the last report. If so, hopefully it won't be too damaging.

Daisy...It's turning out better than I had hoped.

Flowerlady...Thanks! It definitely is a peaceful and relaxing spot to be in.

Susan... your pink and white caladium are simply wonderful and I'm going on a hunt for some..Thank you so much for your visit today and for the info on "Firespike"... I'm pretty new to Florida gardening and have such a sandy soil. I have changed a lot of the soil but the rain washes it down the slope I live on.. anyway.. Your garden is beautiful!
Good luck with Irene, not sure where she is going but my daughter is in W Palm Beach and is a bit nervous..
Thanks again
Sandy

Your white garden is just beautiful. I love the pictures of the progress you have made with the beds. It has came a long way. The Asparagus Ferns are just the neatest looking plants. They look beautiful with your Caladium's. I know some of the southern states gardeners hate the hanging moss but I love looking at your trees with it cascading down. Gorgeous.

Hey Sandy...Gardening in sandy soil is challenging. I add lots of oak leaves to my beds each spring and that really does enrich the soil over the years. Glad to be of help. I do hope that Irene goes out into the Atlantic. We'll keep our fingers (and toes) crossed. :-)

Your white garden does indeed look very cool and serene. I enjoyed seeing how it all started and how far it has come. Your plant combos work well to bring the whole garden together. Love it.

Your white garden is beautiful Susan. An inspiration, really. I may find a little spot to give it a try. I love your Garden Fairies sign. It's just what I am looking for. Do you remember where you purchased it?

Hi Kay...It is fun to take pictures from the start. It helps me realize how far a bed has actually come.

Hi Susan...A white garden would be great in a dark corner of the yard, if you have such a spot. I think I bought the garden fairy sign at Big Lots or Tuesday Morning...that's where I usually find stuff like that for the garden, but it was some time ago. Thanks for stopping by.

Moon garden is also the one that I always wanted to have. Hmm, maybe I should start working toward to it :) You have lots of nice combinations in that garden. Love those gray Spanish moss hanging from the live oak tree. The tree really provides a nice foundation for your white garden.

Hi Ami...Yes, you should create one. You'll love the serene feeling you'll get from it.

I love a green and white garden.It always seems so cool and refreshing in the heat and humidity of summer.Your's is beautiful.

Hi Jeanni...Thanks! Miss Muffet is one of my favorites...but then again, all caladiums are pretty.

Chris...It is definitely a restful place.

Ooh, those texture combos are so beautiful! The caladiums and foxtail fern are gorgeous together. And the tree fern shading the variegated cast iron...just stunning! I loved seeing your progress in just three years. I have two works in progress right now...my own garden and Six Acres. It's hard to be patient and wait for things to fill in.

Hi FloridaGirl...It definitely is hard to be patient and wait for plants to fill in. Fortunately, plants grow quickly in Florida.

Hi Susan,
Oooh... this white garden is really pretty. All the combinations you've put together are striking. What is the var. ornamental grass? I think I've asked before but can't remember if it is the one you don't recall or if I'm not remembering what it is. Love the Miss Muffetts of course and the way they blend in so nicely with the ferns. Really has changed over time ... don't you just love to see the progress!
Meems

Ya know, Susan, white gardens have never held much of a thrill for me, but your shade garden is magnificent. The contrast and texture is beautiful. I have written down almost all of your plant names, and I'll look for them. Just as I feared, the 'African Mask' alocasia is only good to 40 degrees. I wonder if it will come back after freezing to the ground. Thank you for this most edifying and elegant post.

Meems...The var. ornamental grass was purchased at H.D. and unfortunately it didn't have a name on it which is kind of unusual. I've never seen it for sale there again. Don't know what the story is on that, but the grass has been in my garden for 4 years and has done well. In fact, it had grown so nicely that I split it this year.

Sherry...The African mask alocasia does freeze back in the winter which is why I only use it in small pockets here and there. It does come back nicely and is forming a nice small clump. I bought it at Publix. I love the leathery look of the thick leaves.

Looking at Claus Dalby's blog, I decided that a white garden around the greenhouse was just what I need.

Using what I have, so far the immediate area has Gardenias, Philadelphus, Iberis, white Lantana, white Echinacea, Alyssum, and white Gerbera Daisies. Color always sneaks into my displays, so Sedum acre is blooming yellow and one of the Gerbera seedlings turned out pink. I am about to put several pots of Calla Lilies that I am tired of watering into the soil in front of the Gardenia Hedge. 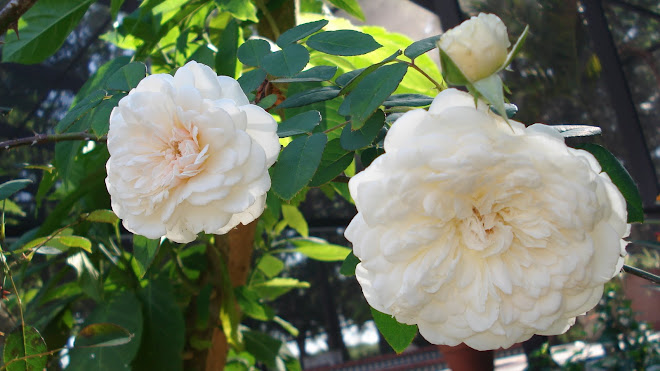 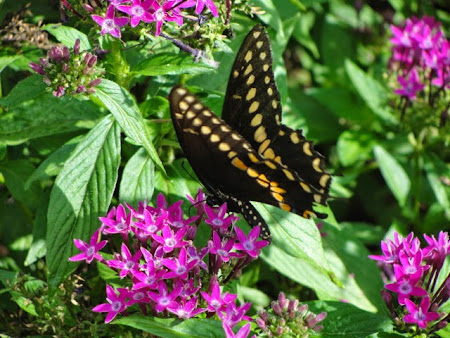 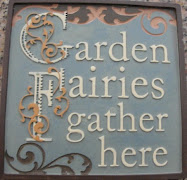 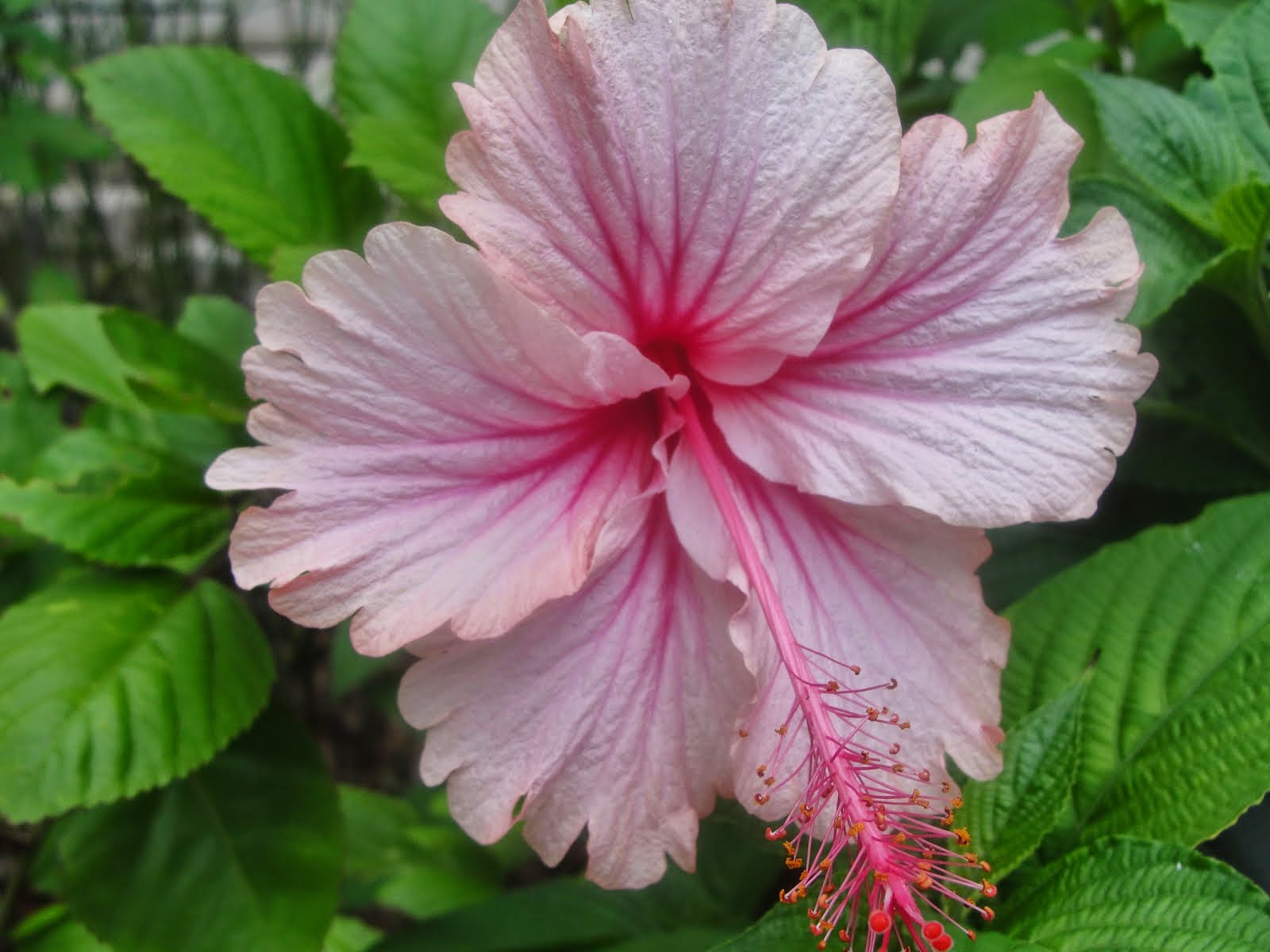 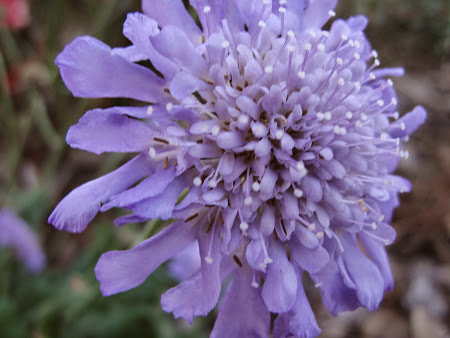 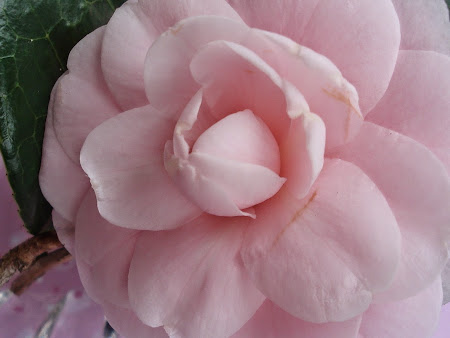 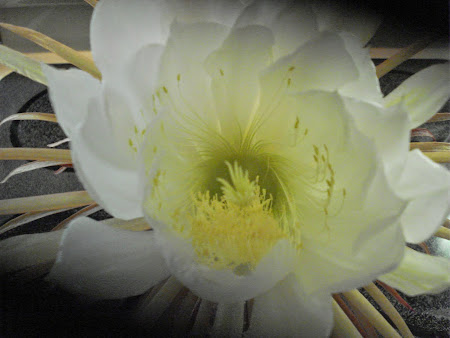 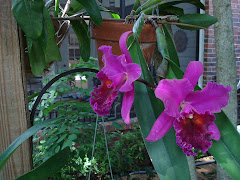 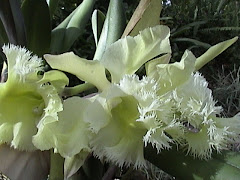 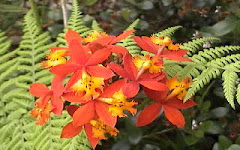 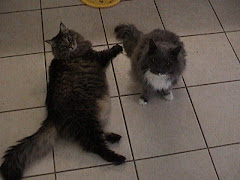 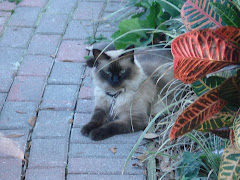 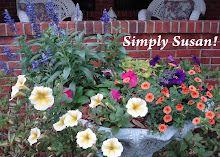